Hats Off to Mentors! 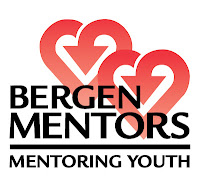 The Record recently featured a piece on how North Jersey dads would be spending Father’s Day.  While he isn’t a dad, Mike Sprague, a mentor in our Mentoring Youth program, is an outstanding role model for three young brothers.  Read his inspiring story below and click here to read about some great dads.

Mike Sprague
Family: For almost two years, Sprague, 43, has been a father figure to the Conlon brothers: Michael, 9; Joseph, 8; and Luke, 7, of Teaneck, through the Mentoring Youth program of the Volunteer Center of Bergen County. Their mother, Renee Conlon, says the boys' father has not been a part of their lives for about three years and she had been seeking a male role model for them, and "he's fabulous with the kids." Sprague is divorced and has no children of his own.
Profession: Senior insurance claims representative
Hometown: Northvale
Ideal day: Sprague is trying to expose the boys to activities he enjoys, such as hiking, nature festivals, baseball, playing with his dog and teaching them to ride bikes. But he says "it really doesn't matter what activity" the four do, he simply wants "just to hang out with them and make them happy. That's it. It makes me happy."
Ideal gift: "Something that they made." He treasures past gifts, a baseball cap with his name on it from Michael and a drawing of his car (complete with a dent in the correct place). And when they gave him a toy astronaut at the end of their first meeting, he glued it to the dashboard and they collectively decided that "this is going to be our navigator, to help us when we go out. … They call him Navigator Bob. A couple months later, they gave me another, Captain Cody. They're my GPS."
What he sees as his role in the boys' life: "To be a small part of trying to mold them into good kids: teaching them about sports and games, also providing some foundation for them to listen. I try and reinforce positive behavior and correct them when they do something wrong, teach them why it's not good."

Interview by Elisa Ung, The Record

For more information about Mentoring Youth, or to sign up for Fall Mentor classes, beginning Wednesday, September 26, call Eva at 201-489-9454, ext. 121.
Posted by bergen volunteer center at Wednesday, June 27, 2012 No comments:

I don’t know about you, but I love finding words of others that express my own thoughts, and the following quote from Steve Jobs, in Walter Isaacson’s superb biography, does just that.  I hope you will let us know if it resonates also with you.


"I didn't invent the language or mathematics I use.  I make little of my own food, none of my own clothes.  Everything I do depends on other members of our species and the shoulders that we stand on.  And a lot of us want to contribute something back to our species and to add something to the flow.  It's about trying to express something in the only way that most of know how -- because we can't write Bob Dylan songs or Tom Stoppard plays.  We try to use the talents we do have to express our deep feelings, to show our appreciation of all the contributions that came before us, and to add something to that flow.  That's what has driven me."

What do these local companies have in common: United Water, Spectra Laboratories, PSEG, BD, Community Bank of Bergen County, Rockland Electric, Sealed Air, State Farm, and Five Star Premier Residences of Teaneck? They are all serious about ending childhood hunger, and they’ve found some pretty creative and effective ways to do it. Some of them are growing vegetables for charities. Some of them are donating money to purchase produce, meat, dairy, and other perishables. Some of are participating in competitions against their co-workers to collect hundreds (and sometimes thousands!) of pounds of food.

In their way, they are all taking on the very serious problem of childhood hunger in our communities. We know that summer is a tough time for many low-income families. When the kids are out of school, parents struggle to pay full-time childcare costs. Parents are also trying to make ends meet without the free lunch and breakfast programs that the kids access during the school year. And to make matters worse, the food pantries usually see a steep decline in donations during the summer months when donors are on vacation.


Find out how to be an advocate for hungry Jersey kids. http://www.njahc.org/


Grow food for low-income kids and their families. http://ampleharvest.org/

Companies: Your Chance to Shine at the Bergen Bike Tour 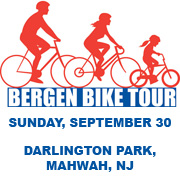 We are delighted to recognize several area companies as sponsors of the 17th Annual Bergen Bike Tour, set for Sunday, September 30 at Darlington Park in Mahwah. View our current sponsors online here.

Proceeds from the Bergen Bike Tour benefit Tomorrows Children’s Fund and the Volunteer Center of Bergen County. Companies who sponsor the Bike Tour support these two organizations not only with sponsorship dollars, but also by forming company teams, donating products and encouraging customers and employees to ride and to volunteer.
Additional sponsors are welcome! “Challenging economic times have really affected our charities,” says Phil Murphy, chairman of the event. “Tomorrows Children's Fund and the Volunteer Center provide programs and services that help kids with cancer, people in need and families in crisis.  We encourage community-minded companies to support this great event.”
Posted by bergen volunteer center at Monday, June 18, 2012 No comments:

Summer’s here, and that means it’s time to volunteer! Whether you’re an individual, family or group of friends, summer is the perfect time to bring service to the community into your life. Why? Summer means great weather, good moods, and maybe even less hectic schedules. It is a great time to be outside and proactive in your community or inside enjoying the air conditioner and helping your neighbors.

The Volunteer Center will be posting Summer Volunteer Opportunities on our homepage.  Check them out here and check back often!


Thanks to Hands On Network for providing these tips!
http://handsonblog.org/2012/06/04/50-fun-ways-to-volunteer-summer-style/
Posted by bergen volunteer center at Thursday, June 14, 2012 No comments: 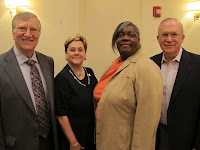 The Volunteer Center’s 45th Annual Meeting saw election of a new president of the Board – David Warshaw, of Ho-Ho-Kus.  Mr. Warshaw replaces Elaine Walsh, of Oradell, whose term as president expired.  Mr. Warshaw has been a member of the Board since 2002 and an officer since 2005.  He was an integral member of the planning team that founded what is now Bergen LEADS, the county’s premier civic leadership program.  Mr. Warshaw retired from an active career with GE, most recently as executive director of GE’s global volunteer program.  He is currently the principal of VISTAS Volunteer Management, which provides consultation to corporations on their volunteer programming.


We would also like to welcome newly elected Board members, Joanne Westphal, Vice President and Regional Market Manager of TD Bank; Jose Vicente, an advisor with Ameriprise Financial Services Inc.; and Katherine Norian, a community volunteer from Oradell.  Both Mrs. Westphal and Mr. Vicente are graduates of the Bergen LEADS program


These community leaders join an active cadre of Volunteer Center board members poised to carry the work of the organization to new heights.  Welcome aboard!

Posted by bergen volunteer center at Friday, June 08, 2012 No comments:

Kayla Lafi, an enterprising 17-year-old, is certainly making her mark in the Celiac community!   She’s created a new non-profit, Teens Living with Celiac (TLC), and hosted its premiere event, a fashion show titled “Catwalk for Celiac.”
Having lived with Celiac since the age of eight, Kayla sought a “fun and innovative” way to raise awareness and funds for the autoimmune disease. She had an experience several years ago that left a lasting impression and also served as the inspiration for her desire to join help others.
While in California competing in a pageant, Kayla met a girl from Colorado who was also living with Celiac. Before that chance encounter, Kayla had never met anyone in her age group who had been diagnosed. The two girls shared the same questions, concerns and ideas and enjoyed the time they spent together.

“We both were so excited to have finally met someone else with Celiac who understood the teen/kid Celiac experience,” Kayla said.  So what does a teen do to bring this issue to the forefront?  What else?  Find the resources and financial support to create a non-profit.  Kayla took it one step further.  In 2011, she applied for Scholastic, Inc.’s BE BIG In Your Community contest to support civic engagement.  Kayla was chosen as one of ten first place finalists from all over the country to win a $2,500 community grant for her program.  This grant has allowed Kayla to incorporate her non-profit, TLC, and enhance her already spectacular annual fundraiser, Catwalk for Celiac.  This grant also matched Kayla to a local affiliate of the national Points of Light Institute, the Volunteer Center of Bergen County.  “The mentorship has been a wonderful opportunity to work side by side with an inspiring and passionate young lady who I know will succeed in whatever she does,” states Debbie Emery, Program Director for the Volunteer Center of Bergen County.
According to Kayla, TLC is a non-profit organization driven by teens for teens! “We want to give support to other teens with celiac disease as they are making a difference in their communities. We have developed programs and project kits to help YOU raise awareness in your community!”
TLC's mission is to raise awareness for Celiac disease to the general public and their communities so that no celiac teen, tween, or child feels left out!  Young people who are diagnosed with celiac disease need a place to feel at home and not isolated. TLC provides the support needed for teens with celiac, raising awareness and helping them make a difference.
The importance of peer connection is not lost on Kayla. She is using her annual “Catwalk for Celiac” as a springboard highlighting her nonprofit organization, TLC, encouraging others, especially young people, to promote awareness in their own schools and communities.  This year’s event, which featured the fashion show plus delicious (gluten-free) dinner, music, raffles, and presentations by inspiring speakers, raised almost $9000.
Posted by bergen volunteer center at Wednesday, June 06, 2012 No comments:

The Northern New Jersey Business Volunteer Council (BVC) is hosting “Everyone on Board,” the latest in its series of seminars addressing how doing good is good business. Designed for leaders of Employee Volunteer Programs (EVPs), the workshop will help companies learn how to use non-profit board service to propel their bottom line.

Amanda Missey, of the Volunteer Center of Bergen County, will discuss board service and how it benefits not only the nonprofit organization, but also the company, the employee, and the greater community.  As part of a non-profit board, employees can learn valuable skills and develop relationships which can positively impact their work.  Serving on a nonprofit board can also elevate the a company's reputation and be an asset to marketing campaigns.
Posted by bergen volunteer center at Monday, June 04, 2012 No comments: