The Chore Night before Christmas 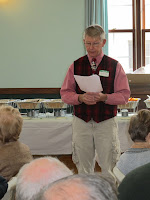 At a recent holiday party, Jack Gardner, who is a handyman volunteer with our Chore Service, shared a poem he wrote about the program and its volunteers.


The Chore Night before Christmas
By Jack Gardner, 2011

Twas the night before Christmas, and all through the house
The faucets were dripping, and it woke up the mouse.
The stockings were hung by the chimney with care,
In hopes that the Chore van soon would be there

The clients were nestled all snug in their beds,
While visions of grab bars and washers danced in their heads.
And Grandma in her ‘kerchief, and Grandpa in his hat,
Had just poured themselves a second night cap.
When out in the parking lot there arose such a clatter,
Mo sprang from her desk to see what was the matter.
Away to the window she flew like a flash,
Tore open the shade and threw up the sash.

The moon on the breast of the new-fallen snow
Gave the lustre of mid-day to the parking meters below.
When, what to her wondering eyes should appear,
But a shinny white van, and eight trusty volunteers.

With a little old driver, she knew in a drop,
It must be that fellow the guys call, Joe Pop.
More rapid than eagles his coursers they came,
And he whistled, and shouted, and called them by name!

As yellow forms that before the wild hurricane pour,
When they slip off the clipboard and fall to the floor.
So up to the church-top the volunteers they flew,
With a sleigh full of grab bars, smoke detectors, and doorbells too.

And then, in a twinkling, Mo heard in the skies
The coughing and burping of each one of her guys.
As she drew in her head, and was turning around,
Down the chimney Joe Pop slid without making a sound.

He was dressed in flannel and denim, from his head to his foot,
And his new Chore hat all tarnished with ashes and soot.
A bundle of supplies he had flung on his back,
And he looked like a plumber, just opening his sack.

His eyes-how they twinkled! his dimples how merry!
No time to spare, he was in quite a hurry!
His droll little mouth was drawn up with a smile,
And the whiskers of his chin were as white as a bathtub tile.

The stump of a pipe he held tight in his teeth,
And the smoke it encircled his head like a wreath.
He had a broad face and not much of a belly,
But it still shook when he laughed, like a bowl full of jelly!

He wasn’t chubby or plump, but yet a right jolly old elf,
And Mo laughed when she saw him, in spite of herself!
A wink of his eye and a twist of his head,
Soon gave Mo to know there was nothing to dread.

He spoke not a word, but went straight to his task,
And stopped all the leaks, then took a swig from his flask.
Gathering up all of his tools, and charging them not one cent,
He gave his head a nod, and up the chimney he went

He sprang to his van, gave a whistle like a train,
And away they all flew like a clear flowing drain.
But Mo heard him exclaim, ‘ere he drove home that cold night,
"Merry Christmas to all, and to all a safe-night!"