WHAT'S ON MY MIND!

THE DAY I SHAVED MY HEAD by Elma

Right now, I can put my hair up in a ponytail, braids or even a bun. But 2 years ago, I couldn’t do any of that. I couldn’t even part my hair.

Two years ago I shaved my head, completely! I looked like a brown egg that had sprouted a body. Keep reading, the reason I did this will become clear. But first, I want to take you along the journey. 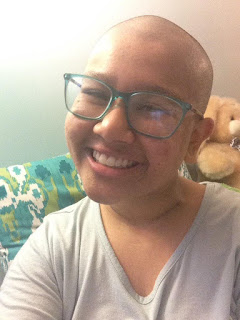 I remember the day I went to the salon. My mother was nervous, as a mother should be. She was worried that I would be bullied, that I would become a social outcast. But I knew this was something I had to do.

Just as my mother was worried, the barber was confused. The man had wet my hair and was ready to snip away with small shears.

He stopped and stared at me, the shears suspended in bewilderment. The man then rested two fingers just above my ear lobe.

At that moment I remembered my grandmother, my great aunts and my aunt.

When I was five, my youngest great aunt died of breast cancer, at home, surrounded by her own things.

I remember when the doctors took my grandmother off of life support because lung cancer had eaten her away; I was six.

When I was eight, my oldest great aunt passed away of stomach cancer. I remember the call at midnight.

And I do not remember my aunt at all. Years before I was born, she passed away. She was 32 and a victim of Leukemia.

Weeks before my haircut, I had read The Immortal Life of Henrietta Lacks. Henrietta had died of cervical cancer. Her daughter, Deborah, almost drove herself crazy because of those tumors. She was afraid of inheritance. I am too.

Then I remember the commercials for St. Jude’s. They are just kids yet they are fighting battles that my family had lost. I see them smiling on screen, tubes up their nose and arms, bald head, but still they have hope.

In fourth grade, I read a book by Patricia Polacco titled The Lemonade Club. In the book, a fifth grader, Marilyn, had leukemia, and so she started to lose her hair. I had seen the same thing happen to my family. In support and to help her through her difficult treatment, Marilyn’s entire class shaved their heads too. Support, it is the least I could do.

I thought of all this and I shook my head no.

“I want it completely off, like bald off”, I asserted.

The man chuckled and began braiding my hair. Then, snip, snip, snip. It was like a weight had been lifted off of me.

He handed the dismembered braid to my mother, who cradled it like a newborn child.

The man used shears to cut away all the remnant hair, the scraps that could not be mailed off to Locks of Love. When he could not cut any further, he buzzed all my hair off.

It is often difficult to explain to people why I did it. How do I explain to them the pain of losing my family? The pain of watching children suffer a ruthless disease? The pain of not being able to do anything about it?

I will never regret my decision to shave my head and donate my hair to a non-profit like Locks of Love, because hopefully I helped a child regain a sense of self confidence.